With our hopes for a new start in 2021 dashed by the announcement of a third lockdown, it’s vital to look for the positives in our current situation. The pandemic has caused many changes to our lives, but not all are negative. The environmental protection movement is gathering pace and COVID lockdowns have highlighted the impact modern life has on the planet and offered realistic alternatives for change.

Back in February 2020, as European nations began implementing lockdowns and retailers were forced to close, the British Bicycle Association argued that bike shops be considered essential businesses and should therefore remain open during a lockdown. The government agreed and the ebike industry is booming. Manufacturers and suppliers of electric bikes have struggled to keep up demand, with a number of key components difficult to get hold of.

With government initiatives encouraging cycling and a public appetite for change, we remain immensely optimistic that electric bikes can solve many problems. The cycling industry is forecasting annual European bike sales to be at 30 million by 2030, which would be double the number of new car sales. We have all noticed a difference in traffic, with people making fewer car journeys and more bikes used for commuting and leisure. The electric bike is a force for good and we can see its impact through the changing face of our roads. We are confident change is here to stay and we are proud to be part of it.

More Ebikes on the Roads and Fewer Cars, and Not Just During Lockdowns

As more people work from home car journey numbers are diminishing, and not just during lockdowns. With companies changing working policies many people may only intermittently return to office working. Riding a bicycle becomes a much safer and attractive proposition, and electric bikes offer increased range and the ability to arrive fresh and clean at work. This has opened up the market to more nervous or less athletic riders, and to those without the time, inclination or option to get changed at their destination. The world of electric biking is open to all ages and abilities, from the most passionate cyclist to the novice road rider.

We, and the Environment, Need More Ebikes

Healthier for you and better for the environment than a car, electric bikes will also save you money. Obviously cheaper to buy and run than a car, bikes are starting to replace cars in certain sectors of the community. In younger, more affluent areas and cities there has been a decline in car ownership, with many giving up a car in favour of greener forms of transport. This is a positive step forward and the more we can do to reduce emissions and pollution, the better.

If we needed any more proof of the devastating impact of pollution, it has been listed for the first time ever as an official cause of death. It took a seven-year legal battle, but Ella Adoo-Kissi-Debrah’s family proved that the nine-year-old was exposed to excessive nitrous oxide levels from traffic outside her Lewisham home. This contributed to her developing asthma and exacerbated its effects. With central London’s ultra-low emission zone now in force nitrous oxide emissions have fallen by 36%, but plenty more can be done. More bikes on the roads is only helping.

The trend is positive, and the Netherlands is a case in point. Having been hugely reliant on bikes at the start of the 20th century, the post-war boom led to cars and roads taking over, with the idea that bikes would eventually no longer be used. With parts of Amsterdam levelled for vast road networks and over 400 children killed nationally by cars in 1971, activists fought for change. Thanks to their efforts and the oil crisis of 1973, these days there are 22,000 kilometres of cycle paths in the Netherlands and more than 25% of trips are made by bike. That compares with only 2% in the UK.

Enjoying the Present and Looking Forward to the Future of Ebiking

We can do the same in the UK and we have reached a tipping point. This time the external factor in the mix is the COVID-19 pandemic. There is a long way to go but all roads point towards progress. The face of our roads is changing. Crucially, the UK government has recognised the importance of reducing car journeys, not just for congestion and pollution, but also for people’s mental and physical health. Having recognised the cycling industry as an essential service, the government showed a tangible commitment to promoting active health with the £2 billion plan announced in 2020 to get the nation cycling and walking more. With thousands of miles of new protected bike lanes amongst the initiatives, never has there been a better time to get ebiking. And with COVID restrictions limiting time spent outdoors to exercising locally, your electric bike really is worth its weight in gold.

So, get out there on your electric bike, for freedom, for fun, for health and for the planet!

If you have any questions about EMU electric bikes or ebiking in general, our advisors are available to help you. Please call our team on 0203 797 7555. Alternatively, please contact us by email, and we will get back to you as soon as we can. We look forward to speaking with you!

You can connect with EMU bikes on social media and discover our latest news and insights into the world of eBikes and cycling.

We are a small team and may not always be able to answer your call immediately, but if you leave a message we will always get back to you as soon as possible.

Made with ❤ by Web Creatives
Sign up to our newsletter 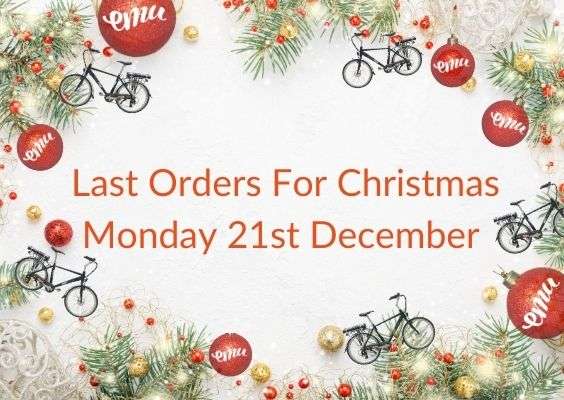 Pre order your Step through now